The new (and lethal) respiratory virus has upended daily life. To find out how we got here, we went to the source 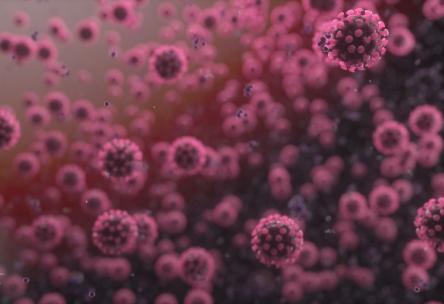 You know the feeling. You’re standing in a public place surrounded by strangers, and all of a sudden, the quiet is broken ... by a sneeze.

During a typical flu season, you may have felt a sense of unease or the urge to step away. But this year, thanks to COVID-19, our collective anxiety is heightened. We’ve never been more wary of germs—or weary of the daily struggle to avoid them.

What exactly is COVID-19, how is it transmitted, what are the symptoms, and how can we all protect ourselves? To find out, we went right to the source: the virus itself. Turns out, it’s a chatty little thing.

First, I should tell you: My official name is SARS-CoV-2, which is short for “severe acute respiratory syndrome coronavirus 2.” It’s a mouthful, I know—but that’s what scientists are calling the virus that causes COVID-19.

It sounds complicated, but it’s more common than you may realize for a virus to be named differently than the disease it causes, like HIV and AIDS, or rubeola and measles. To keep things easy, the media has sometimes referred to the disease as “coronavirus,” but that’s not technically accurate.

Anyway, I’m part of a large family of viruses that can cause people and animals to get sick. You’ve probably heard of some coronaviruses in the past that have caused problems—MERS and SARS might ring a bell.

I was an unknown virus until doctors broke the news that they had discovered me in Wuhan, China, on December 31, 2019. Now, some people are claiming that I was created in a lab as a potential bioweapon. I’m not going to confirm or deny anything right now, but I will say this: I most likely originated naturally, first in bats, before eventually making the jump through other animals to humans.

Precisely where I came from is my secret for now. It’s probably going to take scientists years to figure it out.

2. You’ve definitely gotten around since you were discovered—you’re already in 116 countries and counting. How do you travel so quickly?

My favorite way to travel is by hitching a ride on tiny liquid droplets that are expelled from the mouth by coughing or talking, or from the nose by breathing or sneezing. Keep in mind that I replicate very quickly and a single sneeze can unleash a tsunami of droplets—up to 40,000!

But that’s not all. Research indicates that droplets containing me can’t hover long in the air and tend to fall to the ground within three feet from where I’m ejected—so the recommendation is to keep a safe distance of about six feet from others.

3. How do you typically make your way inside a person?

The droplets I ride are tiny—less than 12 micrometers in diameter. To compare, a strand of human hair can be 60 to 100 micrometers wide. We make our way into your body mainly through your mouth, nose, and eyes.

Just think of how many times a day your hand makes contact with another person, food, or a surface, and then makes its way to your mouth or rubs your face, and it becomes extremely easy to understand how we creep past your defenses.

Because I’m a respiratory disease first and foremost, I travel to the lungs, invading cells there. I prompt an immune response, but in some people, the damage can continue to escalate until breathing is impaired.

Meanwhile, I can also get into the digestive tract, causing nausea, vomiting, or diarrhea.

A large majority of people who I infect—around 80 percent, according to World Health Organization (WHO) figures—recover without needing any special treatment from a doctor or hospitalization. However, about one out of six people becomes seriously ill and reports difficulty breathing.

I pose a larger threat to older people and those with underlying ongoing medical issues, like heart trouble, diabetes, or lung disease (such as COPD).

A study of over 44,000 cases in China, published by China’s Center for Disease Control, found that older patients had higher mortality rates: Those 60 to 69 had a death rate of 3.6 percent, 70- to 79-year-olds had a rate of 8 percent, while almost 15 percent of those 80 and older passed away after contracting the virus.

5. How do I know if I have COVID-19? What are the most common symptoms?

Unfortunately, early on, you might not know that I’ve set up home in your body at all. Doctors are still studying me, but evidence so far has shown that some people can be carriers before they show outward symptoms of being sick. Research out of Johns Hopkins University found that the “incubation period” is typically five days before symptoms start showing.

The most prevalent symptoms are very similar to the flu, and could start off very mild—you’ll run a fever, which is the most common symptom, and you’ll likely get a dry cough. Fatigue, shortness of breath, joint and muscle pain, and chills can also occur. In addition, WHO lists nasal congestion, runny nose, sore throat, and diarrhea as potential symptoms.

6. I hear a lot that you’re no different than the flu, and everyone’s too worried. Is that true?

Influenza and I are not from the same virus family, and through all the studies thus far, it looks like my death rate is higher. The death rate from seasonal flu is less than 1 percent, while the death rate from COVID-19 currently stands at 3 to 4 percent, according to WHO.

7. Can’t we just treat you like the traditional flu if we get sick?

One trouble with me: I was just discovered. Scientists developed the first flu vaccine in 1940 and have been working on new formulas and treatments for almost 100 years, but they have had only a few weeks thus far to try and figure me out. It could take months or years to find a vaccine that’s effective against me—and that doesn’t take into consideration that I’m likely going to mutate, meaning there won’t be just a one-size-fits-all approach to treatment.

Keep in mind also, that I’m coming on to the scene in addition to the flu. COVID-19 is not going to be just a part of the overall one billion or so worldwide influenza infections we see in a given year—the illness I cause will be on top of that. I’m already putting a lot of strain on the health care system in the U.S. and globally, and that will continue as the cases mount.

8. Well, I hate to say it, because you’ve been helpful here in answering my questions, but it is clear that I want to avoid you at all costs. How do I do that?

To stop me, cleaning and handwashing is essential. You want to wash your hands often with soap and clean water for at least 20 seconds.

As for cleaning the surfaces of your home, the U.S. Environmental Protection Agency has released a list of products that kill me, which you can read by clicking here. It includes Clorox bleach products and Lysol branded cleaners, among others.

The information in this story is accurate as of press time and posting. Because the situation surrounding COVID-19 continues to evolve, we encourage readers to follow the news and recommendations for their own communities by using the resources from the CDC, WHO, and their local public health department.